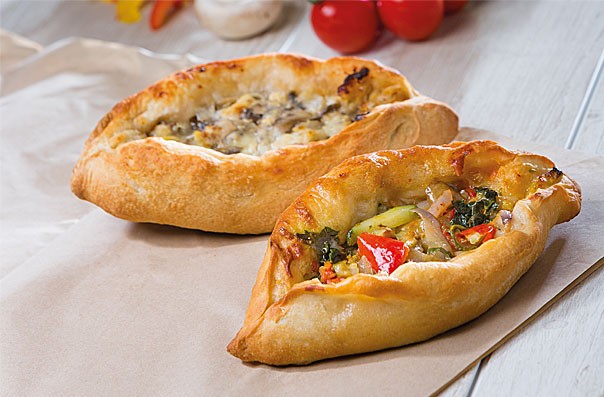 Two new, delicious varieties of savoury snack which will surprise you with their bread dough which is soft and spongy on the inside and crisp on the outside, with an abundant tasty filling.

They are crated using sourdough following a careful process. They are shaped, hand-kneaded and filled with an abundance of selected ingredients, such as fresh vegetables, and then baked in a stone oven. The result is a very attractive product with a large, irregular honeycombed dough which, together with their fillings, will surprise you with its intense, delicious flavour.

Panettis are perfect at any time of the day or as a replacement for lunch or dinner. Its individual format is ideal for take-away sales. Offer them in a paper bag, a punnet or a closed cardboard box to facilitate carrying and maintain correct hygiene. To can also promote them in conjunction with drinks; drawing the customers attention and helping to increase sales.

In catering and restaurants they can be served alone or to share, as a snack or appetizer cut into small portions. With the advantage that once baked, with a simple blast of heat they are once again as freshly baked. 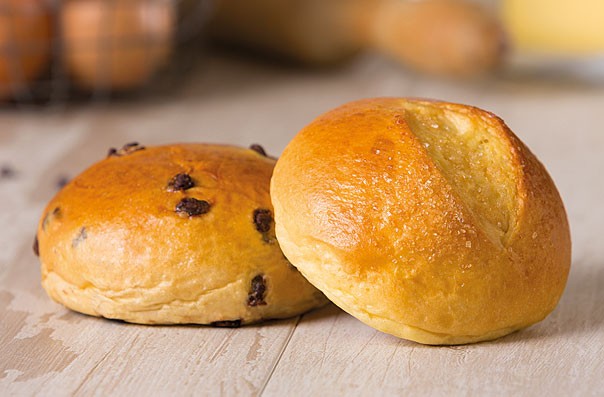 The new Brioches Ylisto have a delicious flavour which reminds us of the classic French brioche, with its golden appearance and soft, spongy, honeycombed crumb. It comes in two varieties, one traditional and the other with chocolate drops, which will delight both young and old. In addition, they come already decorated and do not need baking; simply defrost and they are ready for sale.

They are created with a high percentage of egg and butter, following a slow, careful process that includes double proving to retain moisture in the dough and achieve greatersoftness and succulence. They are then glazed with egg and cooked in a refractory oven.

The classic Brioche has a topping of white and brown sugar that, on baking, provided a slightly crispy, delicious texture. El Chocolate Brioche has chocolate drops in the dough, which attract the attention of the younger customer. The two will feature at breakfast and snack time, because they are soft and succulent, with an irresistible flavour and easy to chew.

The Brioches Ylisto are ideal for sale in traditional establishments as individual items, or as several similar or combined units, which can packaged in order to facilitate carrying and to ensure hygiene. Neither should they be lacking in the range offered by Catering and Restaurant establishments, because they require no handling and they are loved by all customer groups. Serve them accompanied by coffee, milkshakes or a traditional glass of warm milk. A guaranteed hit! 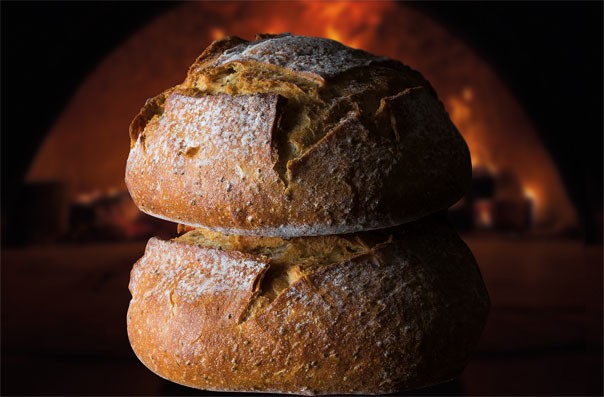 The new Hogazas Artesa are the result of a careful creation and baking process which makes this range one of the most valued on the market. Because they are made using rye and wheat sourdough, given long proving times of over 9 hours, and are baked reproducing the baking techniques of the past. In that way, we ensure that the loaves have a soft, moist, honeycombed crumb, with a unique texture, which keeps its aroma and flavour for longer. Its round format is highly attractive, with a lightly-floured crisp reddish crust with hints of a toasted flavour, recalling classic baked bread.
The Hogaza Chia is enriched with chia seeds, which are considered a superfood due to their nutritional properties. They are rich in calcium, iron, potassium and proteins.
The Hogaza Avena contains bits of oatmeal, a cereal which is rich in fibre, B vitamins, iron, phosphorus and magnesium.
The Artesa Loaves are two high-quality varieties that will win over those consumers who value traditional bread-making. Due to its format, flavour and ingredients, they are ideal for spreading, toasting, as an accompaniment to lunches and dinners, and to create healthy toasted bread. 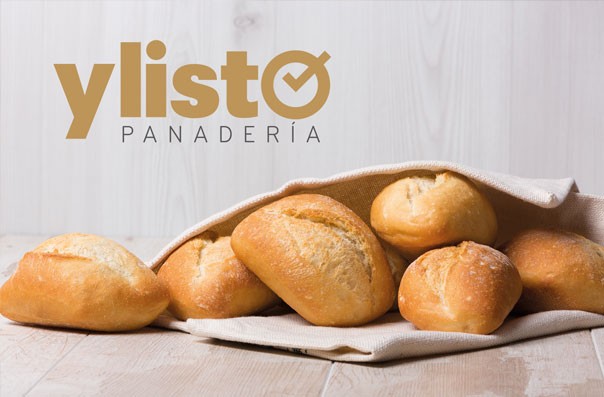 A new small rustic variety with a soft white crumb, which is very versatile and easy to prepare. It is served pre-baked and only needs a few minutes to defrost and it is ready to eat. Thanks to its fine crust and its soft easy-to-eat crumb, the Diamante is ideal for preparing rapid canapes and pinchos in hotel and restaurant establishments, or to accompany lunches and set menus. It is also perfect for preparing children’s snacks, with sweet fillings, such as chocolate spread, or savoury, such as the classic ham and cheese.
It is a staple that should be ever-present in hotel and restaurant establishments which demand quality products which can be prepared rapidly, in addition to catering services and hotel buffets. With a blast of heat they look recently baked. In addition, they can be cut in half without defrosting and toasted immediately in a salamander or toaster. In traditional and retail establishments we recommend sale in a bag for several units. 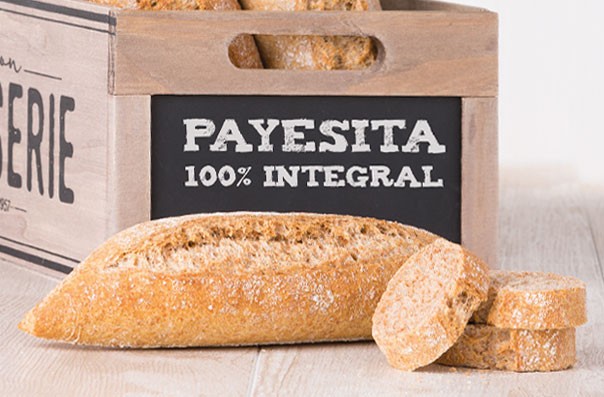 This new medium-format rustic variety will surprise those consumers who take care of their health and diet, because it is made with wholemeal wheat flour. The Payesita 100% Integral has a high fibre content and more nutrients than normal bread, such as B vitamins, vitamin E, proteins and minerals such as magnesium, potassium, iron and zinc. It has a tasty, moist crumb, which is digested slowly, leading to a greater feeling of fullness.
It is created through a careful process which includes baking in a stone oven, which improves its ability to stay fresh longer with the same aroma and flavour. 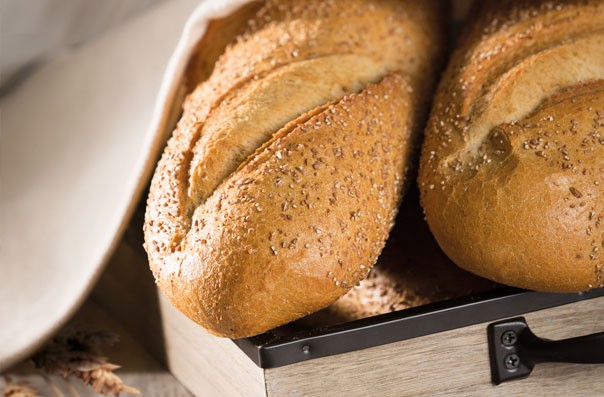 Conceived for consumers seeking bread made with special flours such as spelt, which contains more nutrients and less gluten than wheat flour, and so is more easily digested.
The Hogaza 100% Espelta comes in a 350 gram format, which is ideal for slicing and which keeps fresher longer. Its golden crust covered in spelt grains, and its white crumb, has the characteristic aroma of spelt.
Aimed particularly at traditional establishments, which can create an attractive display using wicker or wooden baskets, which associate the product with what is natural. They are also perfect for those gourmet restaurants that wish to offer new, innovative products on their bread menus. 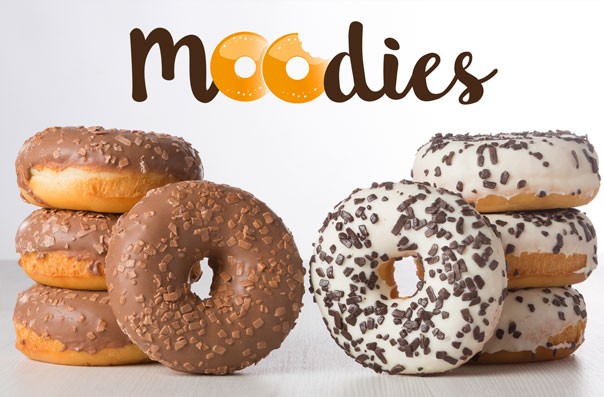 Two new varieties from the MOODIES RANGE with delicious fillings and fun toppings, which will delight both young and old. Because thy have a very soft, spongy fried dough. They are served in 6-unit blister packs, which help with stock control and which also help the product not to lose its softness during defrosting. They are already decorated and simply by defrosting they are ready to eat.
The Moodie Cacao-Leche has a coating and drops of milk chocolate, and the Moodie White has a white coating and chocolate drops.
In traditional establishments you can create a "Moodies Area” in a visible place in the store, in order to boost impulse purchases. In hotel and restaurant establishments they are a basic for breakfasts and snacks, in addition to breakfast buffets in hotels. They are perfect if arranged in rows by colour, in order to create a visual effect that grabs the attention.
The Moodies Range is completed with the Moodie Pink, filled with strawberry, and with the Moodie Confeti, filled with white cream. 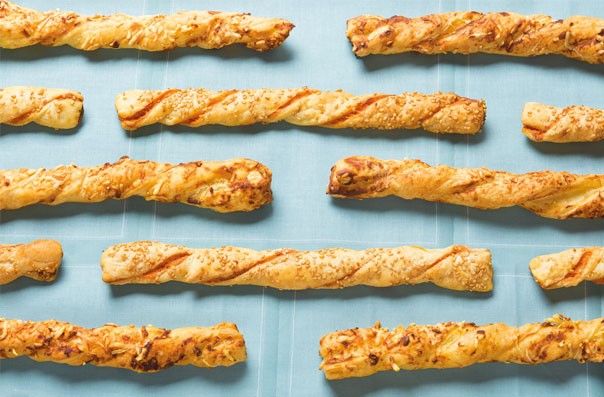 Their delicious fillings and attractive rolled format make them the ideal snack to eat between meals or as an appetizer at lunches and dinners. They are created using margarine to provide a fine, flaky texture, which is crisp and irresistible on the palate. They are filled and rolled by hand, glazed with egg and decorated by hand with various toppings.
The Cheese Mini Twister is filled with Manchego cheese and decorated with a topping of Emmental cheese.
The Paprika Mini Twister is filled with a paprika filling, with a slight spicy touch, and decorated with sesame seeds.
In traditional establishments they can be served as take away with various pieces of the same flavour, or in combination. In hotel and restaurant establishments they are perfect as an appetizer or as tapas, and can even be served accompanied by sauces. 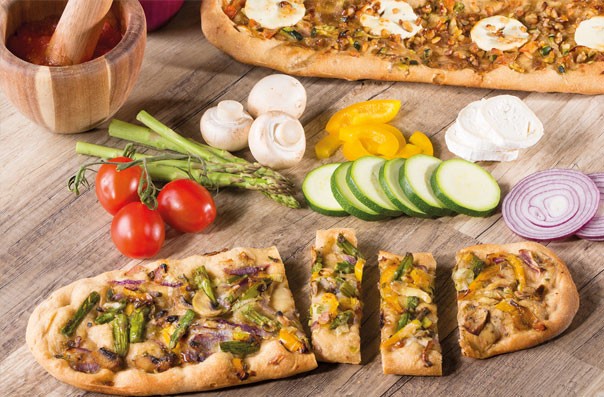 With the perfect format to serve and take away as a single piece or to share, the new Cocas are ideal to eat as a lunch substitute, to eat between meals, or as an appetizer. They are created with a sourdough bread base, kneaded by hand, and are filled with the tastiest natural ingredients. In addition, with just a blast of heat before serving they are as if just made. The Cheese Coca is filled with caramelised onion made to our own recipe, soft goat's cheese, courgette, fresh tomato and chopped walnuts. The Vegetable Coca has wild asparagus, mushrooms, red onion, roast peppers, leeks and olive oil.
It is very easy to handle; just defrost and straight into the oven. In addition, thanks to its format, it aids stock control.
1